Eat out to help out 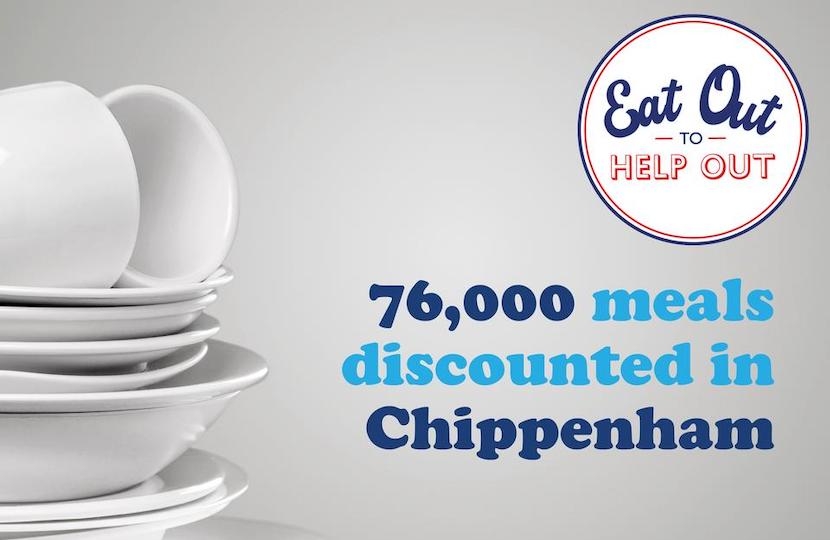 New statistics show that we in the Chippenham Constituency ate over 76,000 meals during Eat Out to Help Out! Nationally, diners across the UK helped to protect 2million jobs by taking part in the scheme, thousands of which were right here in Wiltshire!

With the scheme excelling expectations, by midnight on 31 August more than 100 million meals were eaten by diners, with the 84,700 establishments signed up to the scheme making 130,000 claims worth £522 million, meaning more jobs are being protected through people getting out and boosting the economy.

Looking ahead, early signs show that despite ending, the scheme has continued to boost demand, with a 2 per cent rise in restaurant bookings on Tuesday 1 September compared to the equivalent day in 2019, according to OpenTable.

There has also been an upward trend in the scheme’s popularity since it launched, with 10.5 million meals claimed for in total in the first week, 35 million meals in the second, 64 million in the third and over 100 million by 31 August.

Economists are also predicting that the scheme will continue to have a wider positive effect on the economy, boosting other industries that rely on high street footfall and suppliers of all kinds of produce and goods.

So I am very pleased that we had such a positive local response to the scheme and thank you again for taking part. Any businesses with concerns or views on this, please do not hesitate to share your experience with me by emailing michelle.donelan.mp@parliament.uk

1) Spring 2022 COVID-19 boosters are now available for people aged 75 and over and those with a weakened immune system aged 12 and over will be invited to get a spring COVID-19 booster. The NHS will contact you and invite you to book your spring booster when it’s due.

We are working on making it easier for disabled people and those who struggle with transport. That is why we have announced a record £2.5 million package to support disabled people travel more confidently on public transport.